This is something that took me off guard, and a wild movie experience. Not that I saw this in a theater, but nowadays I seldom do line up and buy tickets, because, frankly, the whole movie experience has been a struggle with noisy, impatient audience, idifferent projectionists (or digital operators since real projectionists are rare nowadays), and a whole lot of hype. I may have to watch this one again, because like a book, the first screening is for the bulk of it, the second reading  is for the attention to detail, and the rest is just plain fun.

Ok, enough of that. I was looking for a movie to watch on YouTube. Since Google acquired the service, it has grown to be quite good, even better, but they should take down those awful comments, but that is another thing entirely.

First off – this is an Indie. I could tell from the non-commercial feel starting with the opening scenes. And that is not a bad thing really, because it has the gritty and blurry-film, not the too-crisp handheld cam TV soap operas and most movies have lately. The movie has that old-school feel to it.  The red scarf nearly got me choking on Potato Fries, I was chuckling so hard, bits came out of my nose. I was having fun and that was just 12 minutes into the movie.  The lines are good, smalltown flavor. Righ off I could smell Longganisang Lucban, and the whole time I was pinned (well, almost, I was having coffee, munching on fries and folding some clothes,from my morning laundry) and that makes it more fun.

A crow just slammed into the mayor’s window. Ha ha!  Mimi (Miles Kanapi) does some real good guffaw-inspiring quick liners. Woo-hoo! Fe (Janice De Belen) in her straight-man routine is stoic-funny. Hannah (Lauren Young) is an exact image of what we boys visualize Lucbanen Girls when we were young – beautiful, strong-willed, and unattainable. Mrs.Montano (Eugene Domingo) as always, gets her askew character down pat. The all too familiar Lucban setting contributed to that close-to-home feeling and the bizarre side of an otherwise sleepy town, but visit this place during Pahiyas and it’s another story entirely. 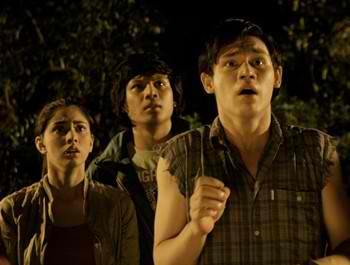 There was a clear buildup. And then there were the series of unfortunate events. I don’t even want to question why the absurdity of the transformation of Remington. It’s their story and I’m just a listener being regaled by the events. Hilarious! When the dead began to rise, I was sure what was going to happen and that pose – snapshot! – scene really brought me down, and I was laughing out of my wits! In a way, it’s something that could come out of a Stephen King book.

I thank Raymond Lee and Jade Castro for adding some translations to the movie. it sure is helpful to know what the current lingo is. And I enjoyed this movie., because it has the courage to poke fun at ourselves, the homophobia, the misconceptions, the fabulousness all went into this bundle. In a way, they have shown the ills, the fear of the heterosexuals, the hidden agendas behind beauty pageants, our own bigotry and sexism. That seance with Roderick Paulate had me laughing so hard I had to redo my folding. All fun, bits and pieces, the smalltown accents, Leandro Baldemor’s death, and the geek who invented the gaydar. Come on, if these things are not humorous, then, I don’t know what is.

And there was a narration right down to the credits, because it stated a fact that is true, we only learned to diss homosexuals after the Spaniards, those defenders of machoness, came into out land. Babaylans are regarded as the Spirit Bridge, with their beings having both foot in the spirit world and our own.

How’s that for a fun movie?

Go see it, if you haven’t already.

There is something about tv commercials and adverts that frightens me. Just try to think about it.Have you been paying attention to those soap ads that come at night? Heck, looking and taking in those messages could make you cringe. One soap promises that you’d be catching all those nasty infections and deadly viruses if you don’t wash with their 100% effective germ protection. Heck, they even have the whole MedTech association to back up their spiel. If only one soap is good enough to wage war againts germs, how come they put out several variants of the
darned thing?

A Bicolano public official is ranting about a TV series for using the Bicol Word ‘Magayon’ in a very degrading manner. Whoa! You’d think he should be thinking of other important stuff, not just causing so much commotion about nothing. In fact, I sincerely advocate rediscovering our own colorful language and dialects to name our characters in soaps and primetime series.Nevermind that the special effects are still not up to par, even with those class C shows they show elsewhere. I say, let’s have more Sinukuans, Tikbalangs, Rajahs, Datus in out shows. Better that the children start remembering what we adults forgot.

Really now. Does Showbiz have to be so early in your day that Unang Hirit have to split all segments so that showbiz crap gets most of the airtime?

I have no interest in watching Fear factor when it was shown with whites doing what most of us thirdworlders do day in day out. But now that Pinoys are in the show, man, I can’t get enough!

Kapuso network should stop airing QTV on a different channel. Just squeeze the  rest of redundance into GMA7 and nake it a 24-hour TV channel.That way they won’t have to bother with paying people to think and create vew show. What new show? The whole network is one big EAT BULAGA!

And please, 24 Oras is a poor excuse for News and Public Affairs. All
that’s missing there are the Dancers.I thought Connie Sison’s entry into GMA7 could add a little class.

And, pray tell, what the hell is German Moreno still doing in TV? The creature can’t even generate moderate product commercials! Kick his scrawny butt out and just extend the evening with mirror shows that they seem to put out nowadays.

Regional TV shows have come of age. Let’s enjoy the local dialect on our own shows.

“NO APPROVED THERAPEUTIC CLAIMS” should really read ” TAKE AT YOUR OWN RISK” . If these meds and food supplements are not really that hot, why did they allow the stuff to get advertised?

If we are to censor a bit of nudity and a little underwear showing on animated series, how come those Violent parts are still intact? What? We think its better the children see senseless violence than a bit of skin? Are we so hung up on morality? or is it selective morality? Adults should see the show in its own context. And please, try to keep up with the younglings. We are being left way back. The kids are learning fast.

The next TV star to emerge will be Joc Joc Bolante. Give the man his own show. Better yet, let him host a Poker Tournament. The man knows how to play.Just look at how he plays the Senate, deadpan and not cringing at every bluff.

Do we really have to have a gazillion variants of toothpaste? And does utterly expensive toothbrushes put out by the same toothpaste manufacturers have to be in tandem with their equally high priced product?

The chocolate man on a deodorant commercial is scaring the bejesus out of me.

Ruffa’s constant yammering, her Ma’s repeated appearances onscreen about this and that are really badly conceived attempts at being in the limelight. Come on, do we really have to know everything about their family?

Speaking of which, how come Ruffa is the only one that is not effectively acting her part in Betty La Fea? Even Megan who is realtively a newcomer, comes off as a natural. Ruffa’s line fall flat everytime. Pilar Pilapil, with her minimal lines every episode, or the lack of it has more effect on the viewer than Ruffa, trying very hard to act.

But, is it only me, or Nicole comes off as greasy and oily on that black clad Clear commercial?

I miss Tina Monson-Palma on the News.

Channel9 should get Harry Gasser to teach the present crew how to deliver news in English. Cathy santillan should come out of hibernation and show how classy newscasting could be.