And this is strange, coming off on a drug-induced sleep, me being under the weather for two days now, sneezing frantically and a while ago, a huge headache and that feeling of cold remedies have no long lasting effect.

But I did go to work, albeit I was rather disconcerted at one time, and one more thing, I was so disappointed with how the other department treated our hand-drawn part in the documentary “Mula Buwis Hanggang PDAF”. Infuriating, really, because they should have requested a dark or black background for the illustrations. It ended up with the motion graphics with the colors inverted, you know, where white is turned to black and vice versa, but no, they had to use tint, and they all looked burnt.

And while I should be sleeping, but is wide awake at 2:22am in the morning, and my nose just keeps on free-flowing, and while Jackson snores up in his room, Gerard probably has to keep the tv on to buffer the noise, ha ha ha! I am down here, just finished a bowl of hot noodles, followed by the last cold med I had to take, and wide awake. 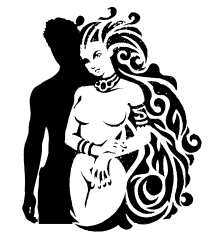 So I ended right here, polishing an old design for a friend. I knew I have reasons keeping some of the stuff I drew earlier. This one was modified, added a male silhouette, and at the new owner’s behest, take away the nipples, of which, now that I look at it, makes the logo more respectable. Originally I had this down for a tattoo, but now Mike Carlo Caparas will own this one, for keeps, for his new venture, I think.

Needs more work though. There are a couple of versions I have done and will be finishing these, as soon as I feel better.

It’s the kind of thing that keeps me on my toes.

I know I have a style some people may or may not like but it is my style. My creation. Some people used to ask me to do this and that and not bothering to supply the materials needed, so I created based on what I like the project to look and feel. It was pro bono and they had the gall to say

and all I can say is

A thank you would have been sufficient.

It would have been a different conversation if they had given me something to work on, not just links to videos, or a [gasp] THE peg, whatever that means. It’s tiresome, when you do stuff for people for free. They seem to get the idea that artist create for the sake of creation.

And we need to earn a living , too.

So I’m better off contributing my artwork for other artists. At least we share a common goal.

Unlike some people I know who are glorified keyboard warriors and button pushers, give them a title and they flaunt it like it’s a great skill to load something up and push play, huh.  Give them something creative to do and they just stand there in bewilderment, thinking “not in my job description”, as if a bigger salary is an excuse for lazyness.

And oh boy, some people at work could use a little sense hammered to their skulls. If things continue with the way they are, people will be leaving. I, myself feel If there is another gig I could do and earn from, and be away from people who think too highly of themselves, I’d get on that train and never look back.

I’m sick, because I am tired.

I am tired because I did some double shifts just to rush up some stuff for the documentary.

I’m sick and tired because, some people have no reason to be arrogant about stuff they think they know.

I’m tired of being sick, because I feel old with a cold.