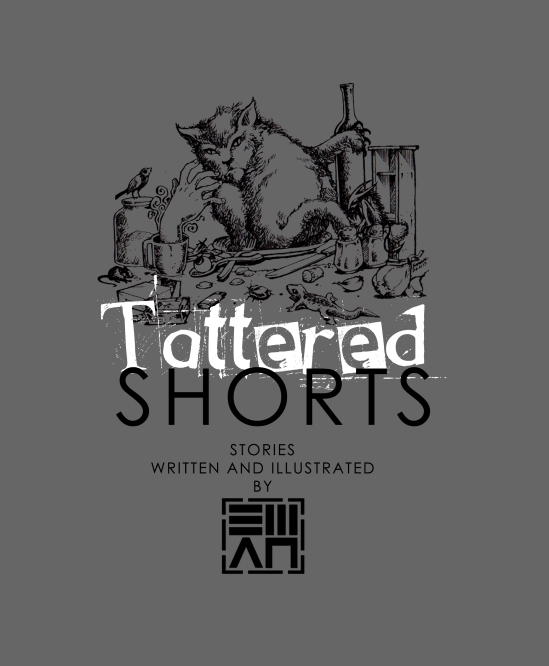 Being a total noob with writing and publishing, I may have put too many eggs in my basket.

Oh the book is coming along nicely, with so many short stories and ideas I have written down, some of them committed to memory, it’s driving me nuts just to keep track.

Now, I’ve come encountered a bump in the road. Two, actually. Like I said, there’s just too many stories for just one book. And the second bump – I don’t have enough funds to go all-writer and publish a book as thick as the white pages.

So while editing and proof reading myself, I’ve come to terms and settled for a couple of economical and practical ways to pursue my delusions of being a writer and illustrator at the same time. Because my short stories, narratives or whatever you may call them have a word count ranging from 900 to 12,000 words, and they are a lot of titles. So, here it is:

TATTERED SHORTS will be available on February 22, 2018. It’s a Thursday, when I play bass and sing myself silly with a couple of outstanding musicians, Pepe and Jerome, and myself, otherwise known as The Komradze [mk II] at Bambu Intramuros. The book is set at 7″x8.5″ and will have at least 10 stories and illustrations. The good part is I still have a lot to put in the next book – DISCARDED SHORTS. hat is if I could pool enough funds for both.

But I’m getting ahead of myself. TATTERED SHORTS will be the initial offering for my own VisualNoise venture, with Mike Carlo as partner, whom I think is good natured enough not to show his impatience (we will get through this bro). DISCARDED SHORTS will follow, and eventually those illustrated graphic komiks novels, of which I will blog from time to time.

Yes, I know I haven’t been blogging for sometime, but since I have decided to write more, draw more and play music, there’s no better time than now.

If you haven’t been following this blog, better do it now for more updates.

But Onie, Ka Onie, Tito Onie among the younger set , and friends, despite the long, grayish white hair and the solemn demeanor (when not smiling, which is rare) is hardly stern nor hard to read. Born with the name Honesto, he is anything but the quite type. Conversations with him can start with one simple thing, and then expound into a galaxy of art, bonsai, gardening, travel and music. There are no boundaries when you sit down with him and just discuss the known universe, and then some that are virtually unknown, punctuated with humorous anecdotes and side-splitting punchlines, there is no boring moment with him.
His creations – Patio Papa, BKD (bahay Ko Din), Ka Boy Grill, Bamboo Grande, Kalye Luna 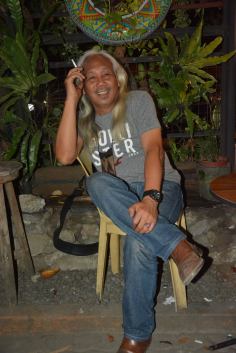 in Baguio City and the two most dear to him Bamboo Giant Malate and Bambu Intramuros – are products of a mind that never cease to discover new things. Driftwood and strange artifacts often find themselves on display in and around these restaurants. And what with his botanical skills (he has designed gardens that has the acclaim of not just institutions, but a queen once congratulated him for a job well done!) Bambu Intramuros along with Bamboo Giant Malate are testament for his love of colorful plants, beautiful music and art. These are his concepts for ingredients of what a good dining experience should be. Indeed, you could call Onie the beating heart of his creations.

His creativity is fueled by music – jazz, classic rock,folk, country, world music and rock and roll. Add to these his keen eye for art in all its forms and disciplines, sulpture, painting, drawings, from the avant garde to the traditional and more of the found-talent types. He has friends and acquaintances from all walks of life, be it politics, public service, musicians, painters, poets, the common man, all are in thrall when the man walks. No, that is not lip service, you have to meet him to know what Bambu Intramuros is all about.

From concept to execution, choosing the right stuff for the right spot, hanging positive words to engage the diner on what could be just another meal and turn it to a whole intellectual experience, picking meticulously the musicians who perform every night, less electronic, more on acoustic, not just elevator music, these are but some of his passionate hands working. He disagrees with extravagance, but the lushness of the leaves and trees, poetry in music, collecting art and the open arms he extends to those who are looking for work is the unspoken lavishness of the man’s character. His organic farm elsewhere is a foundation for his altruism. His bonsai is the incarnation of his soul.
Enigmatic maybe too heavy to describe Onie in one word. Ambiguous? Far from the truth. Let’s just say that Onie and his creations are free-spirited, cannot be labeled with a single tag, but an amalgam of all the things his passion can visualize. You might chance upon him when you come and visit Manila. 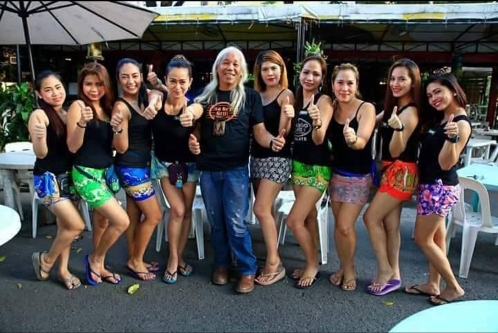 Tito Onie with the Ladies of Bambu Intramuros (from left – Kim, Via, Grace, April__Joyce, Karen, Menchie, She and Haidee) 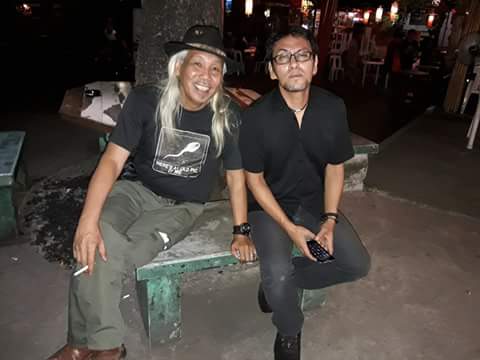 The Man and Me

More than a decade now, there is one quaint place built from an idea that good food need not be expensive, and that there should be lush foliage and live music with the gastronomic pleasures being served. True enough, there is this small corner of Manila, snugly blooming in the middle of three busy streets, Bamboo Giant Malate, as versatile and resilient as its namesake.

Pepe and Jerome dishing out music from the 80s

With art at its heart, and music as its soul, Bamboo Giant is not just a restaurant with an extensive menu, and a roster of seasoned musicians dishing out well loved tunes as regulars and newcomers enjoy the camaraderie, savor the dishes, or just pass the night from a busy day with a brew or two. At thirteen years old, a milestone in itself, Bamboo Giant Malate has become an institution of sorts, a habit worth keeping or a new discovery that keeps them coming back for more. I’d love tell you all about it, but that would spoil the experience, rather, this is an open invitation for you to come and visit, sit down and talk,and let Bamboo Giant Malate speak in rhythms and beats.

The name is so appropriate, it sprouted siblings, each with it’s own character, but a common theme – Bamboo Grande, Patio Papa, Ka Boy Grill – and the youngest shoot to come up, Bamboo Intramuros, a somewhat refined version with a mass appeal, a bigger floor area, yet still rooted in the same fertile soil of art, good food, rhythm and booze, all in the name of fun, relaxation and good conversations. Bamboo Intramuros has taken the step toward growth as it celebrated its first year of existence, keeping that inherent trait but evolving its own uniqueness. Although I should inform you first hand, if you have to come, come early, as the place, like its older kin, seem to throb and buzz as the sun sets. People come back not as customers, but as family and friends, most of them want to enjoy a good meal before going home, others drink to celebrate, ease the day down, and then there are those who want to entertain their own guest, and with the nightly live music, who could argue?

As it gets dark, the place is ablaze with music.

On a regular busy night

And not just any kind of music, mind you. Not the videoke kind. No, the place is unapologetic when it comes to entertainment, but would give you choice musicians, veterans of the circuit, real artists who sing and play well loved tunes in their own stripped-down sets of classic rock, country, folk, transcending genres, not just pop, but would even perform songs you hardly ever hear on radio nowadays. Oh, they do love to rock once in a while. Actually, it’s what makes the nightly entertainment worth waiting for. I have seen and heard the lineup for a whole week and I could not be more pleased.

Bamboo Giant Malate and Bambu Intramuros are the same with its consumer friendly entrees and drinks. We also take pride in creating art out of discarded stuff people just throw away. Recycle, Reuse and Repurpose anything that could be turned into beautiful decors, light covers and whatever it is that could erstwhile be just another piece of junk littering the streets.

But don’t take my word for it. Do drop by sometime, if your itinerary has Manila in it, they would be delighted to to have you. 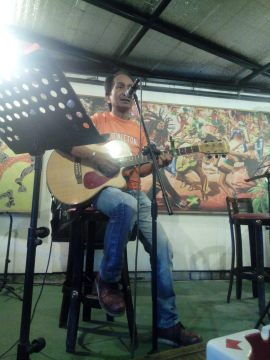